Shining the light on blue carbon

Rachel Goult is Managing Director of Yacht Offset Carbon, a specialised environmental service company established to address the greenhouse gas emissions impact of the yachting industry. In our latest blog, Rachel explores the concept of ‘blue carbon’, the importance of  ‘blue carbon credits’, and the barriers still to overcome in gaining recognition for vital blue carbon ecosystems.

What is blue carbon?

Blue carbon is the carbon stored in coastal and marine ecosystems, such as mangroves, tidal marshes and seagrasses. These ecosystems capture (sequest) large quantities of carbon dioxide (CO2) – a significant greenhouse gas – and store it away in the plants, roots, and soil deep below the ground. Put simply, blue carbon plays a vital role in our fight against climate change.

Where are blue carbon ecosystems found?

Blue carbon ecosystems are spread worldwide. They are known to be present across six of the world’s seven continents, although mapping of these ecosystems is by no means comprehensive.

It is fair to say that a significant percentage of blue carbon ecosystems are located in the world’s poorer regions. Hence, it is not surprising that local communities often exploit the resources of the ecosystems as they struggle against poverty and strive for food security.

Exploitation of the ecosystems leads to degradation. Mangroves are cut down to make way for farming activities, marinas and coastal development, and they are a source of timber for building and firewood. They are also threatened by pollution, sedimentation and climate change. The deforestation of mangrove forests is happening at an alarming rate globally and, as it occurs, the stored carbon is released back into the atmosphere in the form of CO2.

What are the benefits of blue carbon ecosystems?

Blue carbon ecosystems bring a huge number of benefits to our planet, and carbon capture has a very important role. Like other wood plants, the plants of blue carbon ecosystems use carbon to maintain and construct foliage, reproductive organs, stems, branches and root tissues. They also create storage reserves in soil and dead roots.

Importantly, coastal ecosystems are significantly more effective at sequestering and storing carbon dioxide on a per area, per year basis than forests. The reason for this efficiency is that blue carbon ecosystems store significantly more carbon below ground than trees on land. The surrounding water and waterlogged soil prevents the breakdown of the stored carbon for significant periods of time and it can be locked away for hundreds, or even thousands, of years. There is a reported 260 billion tonnes of carbon stored in blue carbon ecosystems, 26 times more than the amount of carbon released through global fossil fuel emissions in 2019[mfn]Nature Climate Change: Protecting irrecoverable carbon in Earth’s ecosystems, 31 March 2020[/mfn]. Losing these ecosystems would significantly contribute to carbon emissions and fast accelerate climate change.

Blue carbon ecosystems bring enormous benefits to the nearby coastal communities. They provide shoreline protection, thereby limiting coastal erosion. They filter and purify the water, leading to biodiversity and creating habitats for endangered species, such as seahorses and turtles, and create habitats for a huge variety of fish and shellfish. Seagrass ecosystems are reported to support around 20% of the world’s fisheries[mfn]World Seagrass Association publication ‘Out of the Blue: The Value of Seagrasses To The Environment And To People, Summary for Policymakers'[/mfn]. Both the fishing and the ecotourism that arises from blue ecosystems helps to support local communities. We don’t have to look too hard to see the many benefits.

What is driving the degradation of blue carbon ecosystems?

Ecosystems are being lost at an alarming rate and we need to do all we can to protect them. Hundreds of thousands of hectares of coastal blue carbon systems are being destroyed each year[mfn]The Blue Carbon Initiative, www.thebluecarboninitiative.org[/mfn], largely due to direct and indirect human activity (“anthropogenic impact”).

Factors such as de-forestation, increasing coastal population size, coastal development, agriculture and aquaculture, sedimentation and siltation all play a role, as do the effects of climate change, such as sea level rise and extreme weather events.

When ecosystems degrade, they not only fail to act as carbon sinks, but also contribute to carbon emissions by releasing stored carbon into the atmosphere. It is estimated that current rates of loss of ecosystems are releasing between 0.15 and 1.02 billion tons of carbon into the atmosphere each year[mfn]The Blue Carbon Initiative, www.thebluecarboninitiative.org[/mfn], contributing significantly to anthropogenic climate change.

Where are the Blue Carbon Credits?

Carbon credits are the basis of carbon financing, a funding tool that places a financial value on carbon emissions, It allows individuals and organisations, wishing to offset their own emissions, to buy carbon credits earned from sustainable projects. To date, there are very few coastal and marine ecosystem projects issuing blue carbon credits.

The lack of blue carbon credit availability is due to a combination of factors, including the complexity of meeting the high standards for accreditation and the time and cost to complete the accreditation process. The key carbon certification principles are: Additionality (does the project bring significant, positive benefits that wouldn’t have happened if project didn’t exist?); Permanence (will the project be maintained); and Leakage (will the project prevent damaging activities from being shifted elsewhere? Is there a net carbon benefit?)

Meeting the rigorous accreditation requirements is extremely complex and costly for blue carbon ecosystem projects, which typically focus on the restoration and conservation of existing habitats. These habitats are often extensive and support poor communities whose livelihoods depend on the ecosystem exploitation.

To obtain accreditation, the blue carbon project will first need to educate communities to change their ways, for example: to fish elsewhere or to change fishing techniques, and to plant and grow alternative wood sources. Convincing communities to change their lifestyle requires strong project coordinators, firm backing from the local community, trust, and a commitment from all involved. It takes a lot of time and effort, especially when the social, natural and financial benefits are not immediately seen, or even guaranteed.

Once the blue carbon project is established a well-managed structure needs to measure and rigorously monitor carbon capture. This will require scientific, technical and managerial expertise and a local governance framework. If there is a low level of education in the local communities, key positions may need to be recruited from outside the community – perhaps leading to resentment or lack of trust.

Compare this to a renewable energy project, built from tried and tested technology on a small amount of land. The day-to-day lives of the local community are unlikely to be significantly impacted during construction, other than potential additional employment. The benefit of power generation from a renewable energy source is immediate, in the form of reduced pollution and improved local facilities. The lack of complexity of renewable energy projects means they are far more likely to achieve a high standard of accreditation than blue carbon projects.

The light is beginning to shine on blue carbon

The good news is that the importance of blue carbon ecosystems in fighting climate change is increasingly gaining recognised among scientists, natural resource managers and the public. This is leading to a determination to develop blue carbon projects that help local people restore and conserve their natural coastal ecosystems.

The international community has begun to evaluate how these ecosystems can be more effectively included within existing policy frameworks, such as the Verified Carbon Standard mechanisms. Plan Vivo has accredited three mangrove projects to date: Mikoko Pamoja and Vanga Blue Forest in Kenya, and Tahiry Honko in Madagascar. Mikoko Pamoja was the first of these projects, producing a small, but impactful, number of blue carbon credits since 2012 (around 2,000 credits per year).

The benefits of Mikoko Pamoja to the local community – mangrove reforestation, enhanced livelihoods, job creation, community services (education, water, and sanitation) – are evident. Word of this success has spread to neighbouring communities and countries, with Tahiry Honko and Vanga Blue coming on board in 2018 and 2020 respectively. The volume of blue carbon credits available from these projects are not going to change the carbon market today, but they will certainly be influencing the carbon markets of tomorrow.

About Yacht Carbon Offset
Yacht Carbon Offset provides an environmental carbon offset service to the superyacht industry. We
allocate greenhouse gas emission reductions from projects that are relevant to the yachting community.
These are typically renewable energy projects, such as solar, wind and geothermal technologies, located
in coastal or island locations to reflect the maritime nature of our clientele. Visit the Yacht Carbon Offset website to find out more. 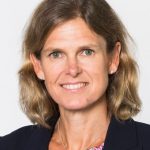 Rachel Goult joined Yacht Carbon Offset in October 2019, a specialised environmental service company established to address the greenhouse gas emissions impact of the yachting industry. In her formal 20-year role as a Director and Lead Analyst at S&P Global Ratings, Rachel built up an industry expertise in carbon offset projects. She has a degree in Chemical Engineering from Cambridge University.